The Buenos Aires Metropolitan Region tends to expand to infinity without economy and ecology, in correspondence with the infinite landscape of the pampas of Argentina. The metropolis has a population of approximately 13 million inhabitants who depend, largely, of the Centre to complete their vital urban activities. In the near future, will be inevitable re – to propose strategies of high density, with a multiplicity of public and community programs that provide habitats for the emerging overpopulation, that optimize territory and resources within general plans of densification and equitable distribution network, of the benefits of the metropolis.
Research project corresponds to the Airline Vacancies thesis carried out within the framework of the mastery of advanced architectural design of fadu-UBA, explores, to the inadequacy of available land, the architectural and urban conditions of possibility for the establishment of programmes of collective room of high density with built-in community programs aimed at medium-low social stratum of the city, using for this, the air space of the commercial and industrial equipment of large, interconnected to the motorways and the Metropolitan Buenos Aires area ring roads.
Proposes, in addition, instances of hybridization architectural experimentation (technical and application programs) that transcend the usual guidelines for mixture of programs within a same mercantilist logic, to deploy a strategy of policy hybridization, enabling both collective housing with public programs incorporated (educational, health and recreational), as collabotarive private initiatives that contribute capital, under State control, for productive initiatives of social inclusion. 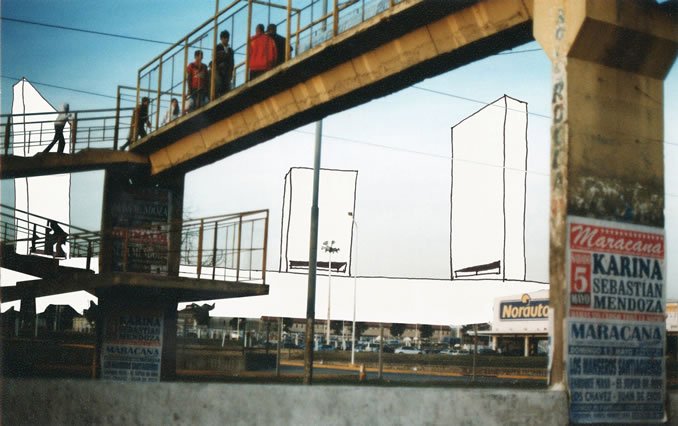 In the town of San Justo; landscape multi-scale of the first Crown of the greater Buenos Aires, mix of housing for medium and low density with industries and tertiary equipment of large-sized, proposes the transformation of urban large scale (equivalent to four apples) module, currently occupied by a few commercial facilities of large-scale (Shopping San Justo, Wallmart, etc.). Territorial module, is associated with the political and economic center of San Justo. The pilot project (for a population of approximately 12,500 inhabitants) poses a possible transformation of existing commercial programmes, through the provision of collective housing of various configurations and community programs, in the airspace of such equipment.
Technical levels of the covers of these building types of large-scale, support and distribute much of the facilities and technology services. An analog replacement of these technical layers with ones with greater structural capabilities, could serve as support, the collective technical facilities, for both the load-bearing structures of housing architectural systems to be arranged above this layer tecnico-estructural. In experimentation, this layer is called: structural plateau, which is perfectible and expandable at the time (as well as programs that enables) and may incorporate several innovations.
Strategy and stratagem: private actor is proposed to participate in the investment of large scale (in structure and infrastructure), with active participation of the State. The private must terminated the monopoly over the fraction of territory required for the concrete development of the housing complex to participate in the investment. The interest in the arrival to fruition of the whole operation, will be of all stakeholders (private, public, internal and external to all inhabitants). Levels of the State would have in charge both the general control of the plan, and management, especially, the completion of the infrastructure and transportation system for the estate, benefiting in this way throughout the affected region.